According to TrendForce research, due to steady weakening of overall demand for consumer electronics, inventory pressure has increased among downstream distributors and brands. Although there are still sporadic shortages of specific components, the curtain has officially fallen on a two-year wave of shortages in general, and brands have gradually suspended stocking in response to changes in market conditions. However, stable demand for automotive and industrial equipment is key to supporting the ongoing growth of foundry output value. At the same time, since the creation of a marginal amount of new capacity in 2Q22 led to growth in wafer shipments and a price hike for certain wafers, this drove output value among top ten foundries to reach US$33.20 billion in 2Q22. Quarterly growth fell to 3.9% on a weakening consumer market.

A prelude to inventory correction was officially revealed in 3Q22. In addition to intensifying severity in the initial wave of order slashing for LDDI/TDDI, and TV SoC, diminishing order volume also extended to non-Apple smartphone APs and peripheral IC PMIC, CIS, and consumer electronics PMICs, and mid-to-low-end MCUs, posing a challenge for foundry capacity utilization. However, the launch of the new iPhone in 3Q22 is expected to prop up a certain amount of stocking momentum for the sluggish market. Therefore, top ten foundry revenue in 3Q22 is expected to maintain a growth trend driven by high-priced processes and quarterly growth rate is expected to be slightly higher than in 2Q22.

With tide of inventory correction approaching, foundries furiously migrate production capacity to sectors of stable demand such as automotive and industrial equipment

Benefiting from strong demand for HPC, IoT, and automotive stocking activities, TSMC posted 2Q22 revenue of US$18.15 billion but quarterly growth rate contracted to 3.5% due to wafer mark ups inflating the 1Q22 revenue base period. As Nvidia, AMD, Bitmain, and other HPC customers continue to ramp up their new products for more advanced nodes, 5/4nm revenue increased by approximately 11.1% QoQ, securing this node the best revenue performance in 2Q22. Although the 7/6nm market was uncertain given murky mid/low-end smartphones market conditions and client order revisions, the node maintained a backstop in the form of mainstream products originating from HPC customers. Revenue generated by this node increased by 2.8% QoQ.

Samsung's 7/6nm production capacity has been gradually migrating to the 5/4nm process and yield rate has continued to improve, driving 2Q22 revenue to US$5.59 billion, a quarterly increase of 4.9%. At the same time, the first 3GAE process using GAA architecture was officially mass-produced at the end of 2Q22. The first wave of customers includes PanSemi, a Chinese cryptocurrency mining company. However, due to the complex 3nm production process, production will require two quarters. Therefore, the 3nm node is not expected to contribute to revenue until the end of 2022, at the earliest. UMC's new 28/22nm production capacity went online smoothly in 2Q22, driving the growth of overall wafer shipments and ASP. This node's revenue share moved up to 22% this quarter while 2Q22 revenue reached US$2.45 billion, growing 8.1% QoQ, and the highest in the top ten.

GlobalFoundries benefited from the release of a small amount of new production capacity and long-term agreement (LTA) guarantees for most of its production capacity. Revenue in 2Q22 reached US$1.99 billion, a quarterly increase of 2.7%. It is worth noting, assisted by the recent U.S. CHIPS Act, Qualcomm, a major American manufacturer, signed a new contract with GlobalFoundries to extend their LTA period to 2028 with a significant increase in agreed volume, mainly producing 5G RF transceivers and Wi-Fi7 in Malta Fab8 at the 14/12nm node, aimed at supporting the localized production of wafers in the U.S.. SMIC's 2Q22 revenue reached US$1.90 billion, up 3.3% QoQ, while its proportion of revenue in the smartphone sector fell to 25.4%. The smart home sector maintains strong growth momentum and revenue from related application products such as Wi-Fi, Bluetooth, PMIC, and MCU peripheral IC for networking and smart control devices increased by approximately 23.4% QoQ.

The sixth to eighth positions are occupied by Hua Hong Group, PSMC, and VIS, respectively. Except for PSMC, revenue posted by other operators was driven by factors such as increases in average selling price and production expansion, leading to marginal growth in 2Q22 revenue. In terms of PSMC, foundry revenue in 2Q22 was US$656 million, down 1.4% QoQ. Since consumer DDI and CIS were among the first wave of product orders revised by customers, this was reflected in the operating performance of each process platform while revenue from both HV and CIS processes declined. PMIC increased by approximately 22.6% QoQ, reflecting that certain PMIC products retain stocking momentum and also demonstrating PSMC’s strategy of continuing to convert production lines to produce PMICs.

Nexchip studiously expanded its production capacity and technology platform process diversity, driving overall wafer shipment growth and contributing to revenue. Revenue in 2Q22 was approximately US$463 million, up 4.5% QoQ. At the same time, in addition to partnering with SmartSens to develop 90nm CIS and continuously increasing production volume, the company also partnered with MediaTek to develop 0.1Xµm smartphone PMIC, contributing to non-driver IC business revenue. Tower has no short-term plans to significantly expand production and its revenue was mainly driven by ASP and product mix optimization. Revenue in 2Q22 reached US$426 million, up 1.2% QoQ. 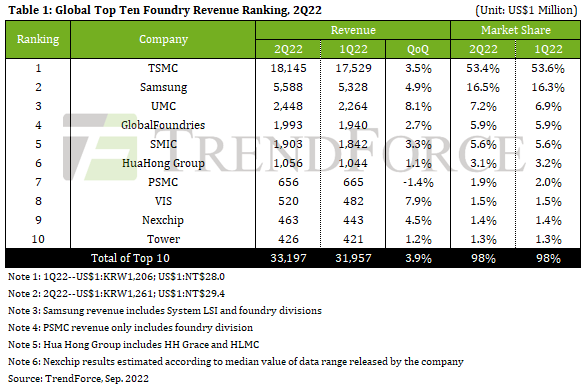