At the moment, the DRAM market has formally entered a new cycle of rising prices, and 2Q21 will see larger QoQ price increases compared with 1Q21, according to TrendForce’s latest investigations. Looking ahead to 2Q21, shipments of various end products are expected to remain fairly strong. At the same time, clients in the data center segment will resume large-scale procurement. Hence, DRAM buyers across different application segments will be under pressure to stockpile. After experiencing QoQ increases of 3-8% for 1Q21, the average contract prices of different kinds of DRAM products are forecasted to rise more significantly by 13-18% QoQ for 2Q21.

Notebook computer production on the whole will maintain a fairly healthy momentum in 2Q21. The demand for PC DRAM products therefore continues to grow as PC OEMs have been raising their annual production targets. Since buyers of PC DRAM products are now carrying a relatively low level of inventory (i.e., around 4-5 weeks) and anticipating that DRAM prices will keep rising in the foreseeable future, they have been further ramping up their DRAM procurement activities. With regards to supply, the three dominant DRAM suppliers retain a conservative approach for raising bit output. The production capacity share of PC DRAM could experience a squeeze in the future because of robust demand in other application segments. For instance, some smartphone brands continue to vigorously stock up on memory components. Also, the demand for server DRAM products are expected to warm up rapidly in 2Q21. All in all, contract prices of PC DRAM products will register significant QoQ increases of 13-18% for 2Q21.

With regards to the demand for server DRAM, the second quarter is traditionally the peak season for server shipments while also being a fairly busy period within the year for the procurement of other kinds of DRAM products. Hence, the situation of different sources of demand competing for DRAM suppliers’ production capacity becomes more evident in this period. TrendForce expects server DRAM buyers to be more aggressive in inventory building during 2Q21 and begin to raise the procurement quantity on a monthly basis. This, in turn, will sustain the uptrend in server DRAM prices. With regards to supply, the server DRAM production capacities of the three dominant suppliers will still not return to the level that existed in the middle of 2020, although these suppliers will slightly increase the share of server DRAM in their overall DRAM production capacities in 2Q21. In addition to the peak-season effect, the COVID-19 pandemic continues to influence server manufacturers as well. Server manufacturers have intentionally extended their component inventories by several more weeks because of the pandemic-induced uncertainties. TrendForce is therefore not discounting the possibility of server DRAM contract prices registering a QoQ increase as large as around 20% for 2Q21.

With regards to mobile DRAM demand, smartphone brands will not relax their inventory-building efforts in 2Q21 as the production capacity crunch in the foundry market has made them more vigilant in maintaining a stable component supply. The quarterly total smartphone production volume for 2Q21 is forecasted to exceed 300 million units. Although the three dominant DRAM suppliers have yet to adjust their product mixes for 2Q21, they will probably have to later on because the ASPs of server DRAM and other kinds of DRAM products are rising faster than the ASP of mobile DRAM. Hence, the production capacity share of mobile DRAM could be scaled back so that the production capacity share of server DRAM could grow. Additionally, the behavior of mobile DRAM buyers has been influenced by the cyclical upturn in prices and the anxiety over a tightening of supply in the future. They will continue to procure in large quantities so as to avoid the risks of a supply shortage and larger price hikes. This means that mobile DRAM prices will be on the uptrend as buyers stock up in advance.

With regards to demand, the three growth pillars of the graphics DRAM market are graphics cards, game consoles, and cryptocurrencies. At the same time, the mining of various cryptocurrencies has become a lucrative activity. Besides graphics cards that represent the more conventional mining technologies, miners are buying notebooks for this purpose as well. Sensing opportunities, Nvidia has launched CMP (cryptocurrency mining processor) cards and thereby taken up more of DRAM suppliers’ resources. This, in turn, has led to small- and medium-sized OEMs and ODMs experiencing a widening supply gap for graphics DRAM. With regards to supply, the three dominant DRAM suppliers have all reassigned their production capacity for graphics DRAM from GDDR5 to GDDR6, resulting in an increasingly lopsided discrepancy between the two products’ bit supplies, so there is no effective resolution to the ongoing shortage of GDDR5 products. As for GDDR6, demand remains strong as cryptocurrency mining is keeping the demand for graphics cards at a high level, although Nvidia is hogging much of the existing production capacity for graphics DRAM. Looking ahead to 2Q21, the supply situation will still be very strained unless the values of the mainstream cryptocurrencies undergo a drastic change. TrendForce forecasts that contract prices of graphics DRAM will rise by about 10-15% QoQ during this period.

With regards to consumer DRAM demand, the demand for TVs, set-top boxes, and networking devices remains strong due to the prevailing stay-at-home economy. Additionally, the build-out of 5G infrastructure and the rapid migration to Wi-Fi 6 contribute to the brisk demand for low-density consumer DRAM products. The supply gap in consumer DRAM market is already significant at this moment and will likely widen in 2Q21. With regards to supply, the overall production capacity for DDR3 products is gradually shrinking. The three dominant suppliers are migrating to the more advanced processes such as the 1Z-nm and 1-alpha nm while reassigning the wafer production capacity of the older processes such as the 20nm and 25nm to CMOS image sensors. Also, Taiwan-based suppliers have allocated some wafer production capacity to products with higher margins (e.g., logic ICs and Flash memory). As a result, the consumer DRAM market is in a rare situation of experiencing a supply shortage and a demand rebound at the same time. There is a strong likelihood that prices of some consumer DRAM chips will register a QoQ increase of almost 20% for 2Q21 contracts, and there is room for further hikes following quarterly contract negotiations. 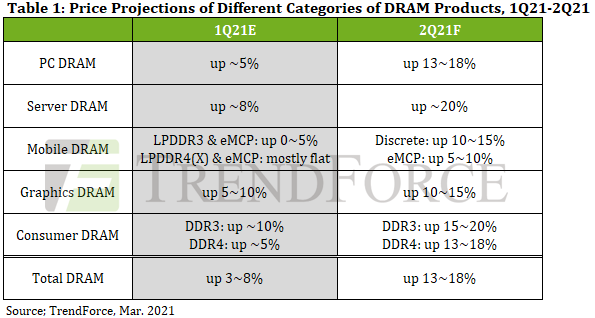